Menu
<< Back to Free Help

Complaints of difficult, labored, or uncomfortable breathing (called dyspnea) can be a signal of a serious emergency or of a mysterious medical puzzle. Seek immediate professional evaluation if this problem has never been diagnosed. Most often a person will describe it as “not being able to catch my breath,” or “not getting enough air,” even while appearing to breathe normally. Certainly the inability to breathe properly can be alarming, and many persons will immediately react with anxiety, fear, or panic.

Under normal circumstances, difficult breathing comes after any strenuous activity. If the degree of the problem seems out of proportion to the amount of exertion, concern is appropriate. Troubled breathing is sometimes experienced in pregnancy, since the uterus expands upward, reducing the possibility of a full inhalation. Severe obesity can also reduce the capacity of the lungs to inhale fully.

Most physical causes of dyspnea are associated with disorders of the respiratory and cardiac systems. Acute and chronic diseases of the lungs are the most common physical causes. Within the respiratory system, the problem usually stems from an obstruction of air flow (obstructive disorders) or the inability of the chest wall or lungs to expand freely (restrictive disorders). Each of these disorders makes the patient work harder to take each breath and decreases the amount of oxygen that he can absorb with inhalation. The three major obstructive disorders are bronchitis, emphysema, and asthma. In these problems a second common symptom is “chest tightness” upon awakening, shortly after sitting up, or after physical exertion. 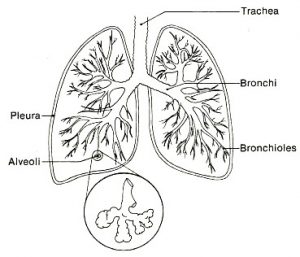 The primary symptom of bronchitis is a deep cough that brings up yellowish or grayish phlegm from the lungs. With emphysema, the shortness of breath gradually becomes worse over the years. The distinct symptoms of bronchitis and the gradual onset of emphysema will usually prevent these disorders from being misdiagnosed as severe anxiety or panic.

Those suffering from asthma will complain of difficult breathing, a painless tightness in the chest, and periodic attacks of wheezing. Severe cases can cause sweating, increased pulse rate, and severe anxiety. The primary trigger of an asthma attack is an allergy to such things as pollen, dust, or the dander of cats or dogs. Attacks can also be caused by infections, exercise, psychological stress, or for no apparent reason. Some asthma sufferers anxiously anticipate the next attack, since an acute attack of asthma can come suddenly “out of the blue” and last for an uncomfortably long time. This fear of an impending attack can actually increase the likelihood of the next attack and can extend the length of each attack. Asthma is a good example of a physical disorder that can increase in severity because of anxiety or panic.

Chapter 6 of the self-help book Don’t Panic will describe the manner in which panic can contribute to difficulties in patients with chronic obstructive pulmonary disease. Special attention is given to chronic bronchitis, emphysema, and asthma.

There are a number of restrictive disorders of the respiratory system that cause difficult breathing. Some produce a rigidity of the lungs (pneumoconiosis, collagen disease, pulmonary fibrosis); other involve the interactions of muscles and nerves (myasthenia gravis, Guillain Barre syndrome); and still others prevent the lungs from expanding to full volume (pleural effusion, pneumothorax, hemothorax). A restrictive deficit in pulmonary function can also be caused by pulmonary edema, which usually stems from heart failure or occasionally from toxic inhalants.

Dyspnea may occur in any of the various diseases of the heart and lungs, but it is more prominent in those associated with lung congestion. For example, mitral stenosis occurs when a small valve between the left upper chamber and left lower chamber of the heart (the left atrium and left ventricle) becomes abnormally narrow. As blood is forced through the heart, pressure backs up into the lungs and produces congestion. It is this congestion that causes breathlessness.